The state-owned company at the forefront of Victoria’s timber industry has escaped further legal sanction after complying with court orders to rehabilitate 22 hectares of rainforest.

Despite the penalty, green groups fear the episode, along with recent changes to forests law, could mark a more lax attitude towards the transgressions of loggers.

As part of the sanctions, VicForests was required to upgrade education programs for its workers. The Department of Sustainability and Environment (DSE, now part of DEPI) also mandated that the company build ties with environmental advocacy groups as penance for having cleared illegally eight hectares of protected forest in East Gippsland last year.
Although the case tarnished its image, the company has lived up to its part of the deal. The bond ends this month, and both VicForests and DEPI (in eerily similar statements) confirmed that the 12-month probationary agreement has been complied with in full.

VicForests, a state-owned company, oversees the contractors who harvest and replant trees. The forestry company has improved training so contracted loggers can better recognise rainforest plants.

Also, a spokesperson from the Arthur Rylah Institute confirms that the company has begun working with the Leadbeater’s Possum Advisory group.

VicForests' action on the final condition is less clear. VicForests claims it has replanted 22 hectares of native bush in East Gippsland, but neither the company nor DEPI confirmed the exact location.

According to VicForests' annual report, the legal costs involved in such environmental battles were the key reason for its net profit loss in 2011-2012.

The government has been making moves to assist the failing industry. In a bold move to cut the industry’s administrative costs, the Victorian parliament passed a series of amendments to the Sustainable Forests (Timber) Act (2004) on June 28, 2013. Ms Young is concerned that will give VicForests a carte blanche to native forest in Victoria.

Amelia Young from the Wilderness Society is concerned that the transgression sets the stage for more disaster. Her biggest concern is how VicForests will protect the environment given their heightened autonomy in the recent Timber Act amendments.
“It’s putting the fox in the henhouse,” said Ms Young.
She believes that because the board is responsible for pursuing commercial returns, they are not best placed to consider the environmental costs of logging operations. “In fact, given their responsibilities, it is likely they will not,” Ms Young stated. She cites the illegally cleared hectares as a prime example of timber transgressions.

The recent amendments remove the requirement for contractors to have an operating licence, give VicForests indefinite ownership of transferred land, and allow VicForest’s Board to approve its own timber harvesting plans. All three components of the plan have come under criticism.

A chip off the old block: How new laws affect forestry regulation 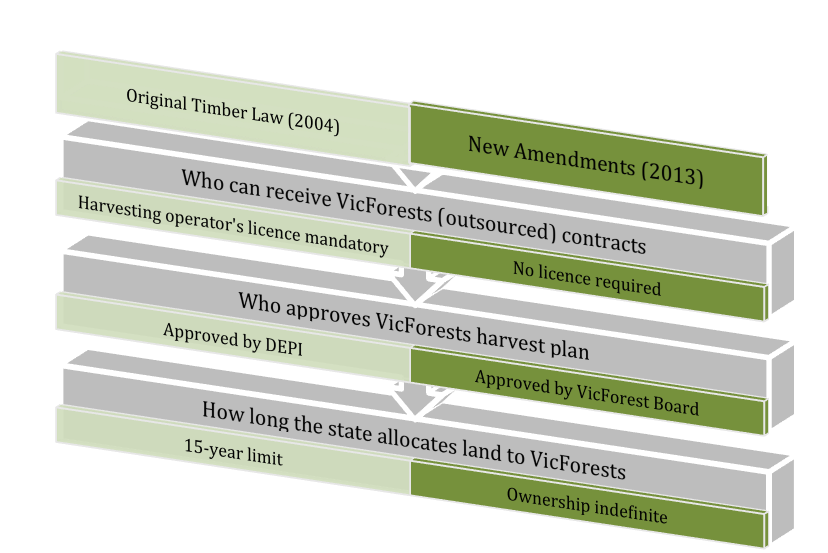 Hansard records confirm that members of the Victorian Government claimed cutting requirements for harvester’s licences would reduce redundancy. Members of the opposition voiced their concern that the government’s primary motivation was economic, at the expense of safety.
Logging advocates are quick to counter that the environment will be safe. Forests are still governed by Management Plans. Harvesting has to meet the Forest Practices Code. So there are regulations, even with the new amendments.
But the degree of freedom now awarded the industry is unprecedented. Amendments allow VicForests to approve its own Timber Release Plans—which contain details of where they will harvest and replant. This year’s rainforest logging ordeal has made environmentalists wary that VicForests, if approving its own plans, will slip again.

Even if VicForests does not harvest any more native forest, activists question if the company’s plans for replanting would neglect to invest in robust, bio-diverse flora. The National Sustainability Council reported that regrowth vegetation—which tends to be just one species—is of less ecological value than rainforest.

Activists also have a third concern about self-regulation: short-sighted over-harvesting. Chris Orchard, a Melbourne based volunteer with Wilderness Society Victoria, is struck by the devastation of over-logged native forests. 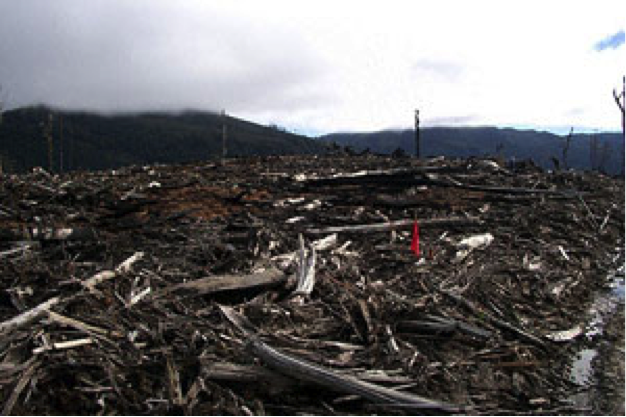 Forestry advocates counter that harvest levels from public native forests are below the calculated ‘sustainable levels’. As one member of the Victorian timber industry remarked, “It’s only 10 per cent of the forests” (that’s sixteen times the size of Melbourne’s Yarra Bend Park).

Despite the “sustainable” levels, conservationists are concerned that VicForests can now determine where and when they will log, without any longer having to put their logging plans out for public comment. 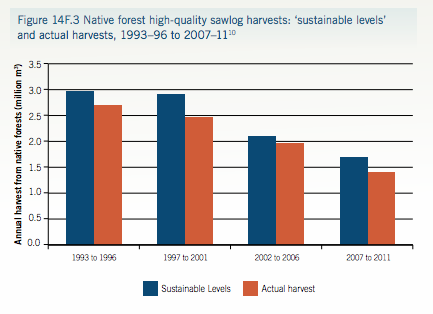 Not only is the Board now in charge, but the new amendments allow the state to allocate land to VicForests indefinitely. The time period used to be 15 years. Kelly O'Shanassy, CEO of Environment Victoria is concerned about the state government’s motives: “We’re worried that the brown side [corporate profit] of the debate basically is going to completely overshadow the green side, which is the environment protection.”

But how profitable is this venture? Premier Denis Napthine boasts that VicForests has earned an $11.58 million net profit during its eight-year life. But since 2007, VicForests has been attacked (most notably by The Age) for failing to produce a consistent profit.

The above chart shows the amount of timber the company has produced (increasing, see green area). VicForests pulls in around $120,000 in annual revenue. In other words, the timber is selling (black line). Yet the company is losing money (red line).

Court costs aside, environmental activists have latched onto the argument that there is fiscal danger in indefinite ownership. So for both sides, as spring planting begins, the court battle may be over, but the war continues.


This article appeared in The Citizen.

Email ThisBlogThis!Share to TwitterShare to FacebookShare to Pinterest
Labels: Environment